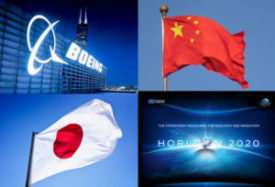 The project «UKRAINE» (Ukraine Replication, Awareness and Innovation) is based on EGNSS, and funded by EU Framework Programme for Research and Innovation “Horizon 2020”.

The signing ceremony was preceded by the presentation of a projects chain on issues of energy efficiency. Researchers on various university faculties and departments are working on these projects.

NTUU “Igor Sikorsky Kyiv Polytechnic Institute” cooperates with representatives of various structures in Huizhou since 2013 and with the Huizhou University since 2014. Today the following areas of cooperation between the two universities are outlined. They are: chemistry, biotechnology, electronics, information technology, special engineering, renewable energy.