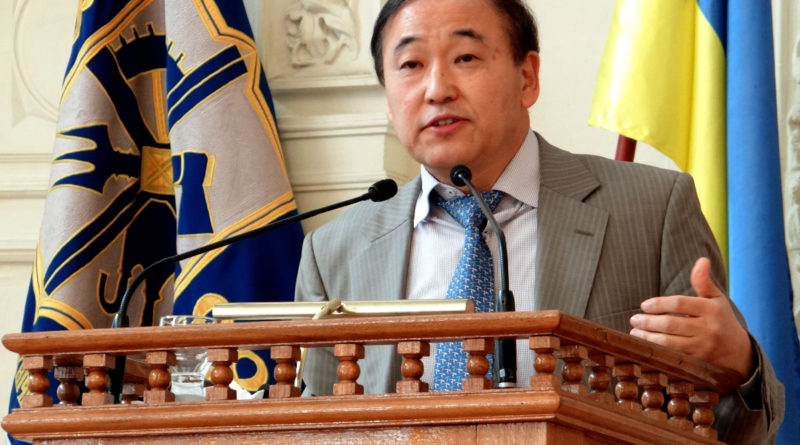 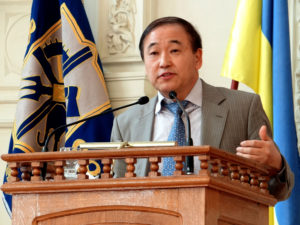 Last Friday, on March 10, 2017, Igor Sikorsky KPI was visited by His Excellency Ambassador Extraordinary and Plenipotentiary of the Republic of Korea in Ukraine Mr. Lee Yang-goo along with his secretary Ms. Kateryna Chorna.

Within the walls of the main building of Igor Sikorsky KPI guests were warmly welcomed by the administration. Among representatives of the university were Rector Michael Zgurovsky, Vice-Rector for International Collaboration Sergii Sidorenko, Deputy Chief of ICD (foreign economic activity and protocoling) Yevhen Polishchuk and Head of Foreign Economic Activity Office Andrii Shysholin.

In general, the discussion topic was about the possible ways of cooperation between our university and the Embassy of the Republic of Korea in Ukraine. The parties outlined some basic priority collaboration directions of a mutual interest. It was also agreed on the need for further “thematic” meetings so that the representatives of Igor Sikorsky KPI would be able to present university activities of defined areas for the Ambassador. Such areas as information technology, biotechnology, new materials, agrosphere became of a particular interest for the delegation.

Right after the arrival delegation went on an excursion to the State Polytechnic Museum, where the Ambassador was accompanied by prof. Sergii Sidorenko. The familiarity with the museum was made in an unfettered environment and traditionally ended with taking photos.

After the walk guests were invited to the Hall of negotiations. The meeting started in a traditional way with the greeting words and expression of mutual respect by the parties. In a laconic opening statement, M. Zgurovsky outlined the current state of relations between the two countries including double degree programs with Korean universities and active cooperation with the companies of the Republic of Korea.

In his turn, the Ambassador expressed his gratitude for the hospitality and warm welcome. While talking about building of so-called «creative economy» in the Republic of Korea, he noted a great potential Ukraine had and a significant role of Igor Sikorsky KPI in the scientific and innovative development of the country. Therefore, it is important to strengthen the partnership between Kyiv Polytechnic Institute and universities and companies of the Republic of Korea.

One of the great meeting outcomes was that the parties expressed their intentions of creation Ukraine-Korea Science, Technology and Innovations Center. The Center is planned to be established on the basis of already existing Ukraine-Korea IT Education Center. The importance of the future Center is not only about the next step to expand bilateral relations, but it is also about the fact that it would create a serious economic background for deepening Ukrainian-Korean educational, scientific and industrial relations in the future.

The final part of the visit of the delegation was a lecture for students given by the Ambassador on “Prospects of Ukrainian-Korean relations” and “Economic miracle of Korea on the Han River.” It was carried out in a half-festive atmosphere in the Hall of the Academic Council and full of inspirational slogans, such as “The crisis is a chance for a country” and “Nothing is impossible!”

The pictures of the visit you can see here.