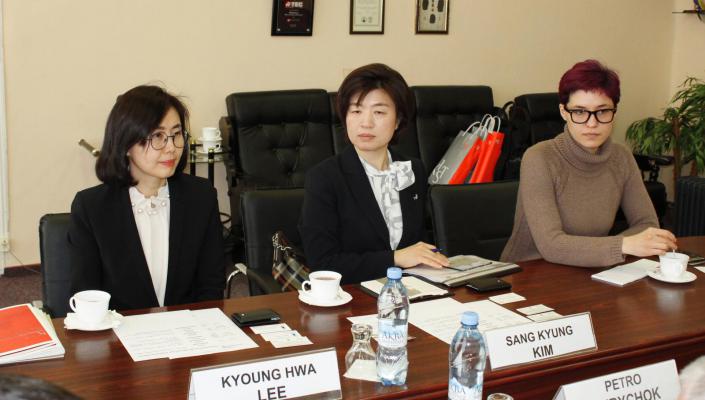 On March 29, 2018, the Korea Education Center in Ukraine hold a meeting and hosted, H.E. Ambassador Extraordinary and Plenipotentiary of the Republic of Korea to Ukraine Mr. Lee Yang-goo, representatives of the Korean Institute of Development? Korea Institute of Science and Technology (KIST) and some Ukrainian higher educational institutions, including Igor Sikorsky KPI, Taras Shevchenko National University of Kyiv, Kyiv National Economic University and others. During the meeting, the Concept of the Ukrainian-Korean Center as an open platform for education, science, and innovations on the basis of Igor Sikorsky KPI was presented.

Then the KIST delegation visited Kyiv Polytechnic Institute, where they met with the university leadership and representatives of the Faculty of Electronics (FEL) and the Faculty of Biomedical Engineering (FBMI). The Korean party was represented by KIST Dean Dr. Sang Kyung Kim and director of the International Research Institute Ms. Kyoung Hwa Lee. The Ukrainian party was represented by Vice-rector on scientific and pedagogical work Petro Kyrychok, Dean of FEL Valeriy Zhuykov, Head of Foreign Economic Activity Office Andrii Shysholin, coordinator of academic mobility of FEL Anton Popov, coordinator of academic mobility of FBMI Larisa Kalashnikova and Associate professor of FBMI Ievgen Nastenko.

The purpose of the Korean delegation visit was to expand cooperation in the field of academic exchange of students and to discuss further cooperation within the framework of the double-diploma program.

During the negotiations, the parties discussed the issues of the establishment of an exchange system not only for students but also for young scientists, the issue of cooperation in the field of scientific research. The parties discussed the possibilities of lectures delivery by Ukrainian teachers in KIST and vice-versa. In addition, proposals from the Ukrainian side regarding joint publications in international scientific journals and the participation of Korean students in international events, held in Igor Sikorsky KPI were considered. The Korean party expressed its readiness to support such initiatives.

After the negotiations were over, representatives of KIST went to the Faculty of Electronics, where students, postgraduates and teachers of Igor Sikorsky KPI were waiting for an open lecture by Korean partners on the possibility of participation in the double-diploma program, to be launched in September 2018.