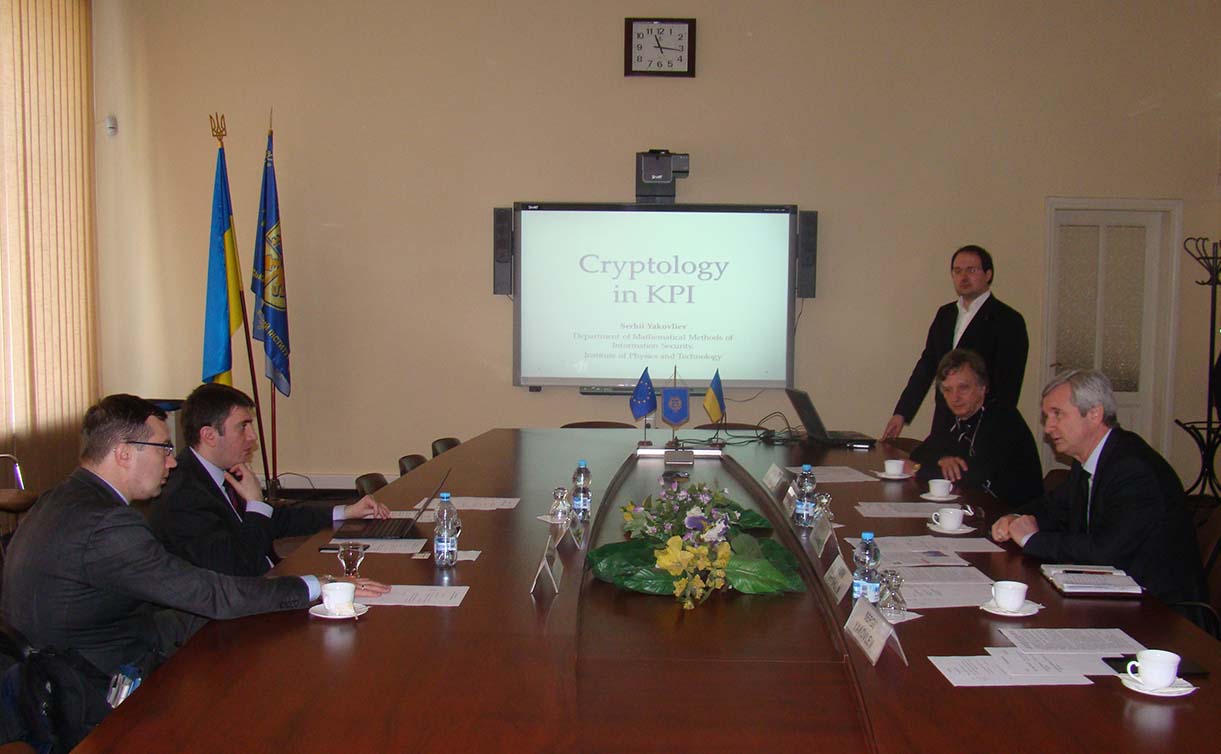 On Friday, April 13, 2018, Igor Sikorsky KPI hosted a representative of the Project Office of the Council of Europe Mr. Giorgi Djokhadze, accompanied by Mr. Oleksii Tkachenko, a representative of the Security Service of Ukraine. The negotiations had the participants. The main goal of the meeting with the University was to discuss the possible foundation of a training center on cyber threats on the basis of Igor Sikorsky KPI for Eastern Partnership countries (Ukraine, Armenia, Azerbaijan, Moldova, Georgia, Belarus) with the support of the Council of Europe.

The guests were warmly welcomed by representatives of the management of the university and of the Institute of Physics and Technology (IPT). Among the participant of the meeting there were the vice-rector for scientific and pedagogical work (perspective development) Oleksyi Novikov, head of the Foreign Economic Activity Office Andrii Shysholin , acting director of the IPT Tetyana Lytvinova, head of the IPT Department of Information Security Mykola Grayvoronsky and associate professor of the IPT Department of Mathematical Methods of Information Protection Sergii Yakovlev.

During the meeting, Mr. Giorgi Djokhadze told the participants about the peculiarities and main activities of the Project Office of the Council of Europe and expressed his vision of possible cooperation with the university.

The parties discussed the prospects of creation an educational center in the field of countering cyber threats on the basis of Igor Sikorsky KPI. Special attention was paid to some practical issues, in particular, to the organization of the residence of foreign students in the training center. Mr. Giorgi Djokhadze expressed his interest in the possibility of Igor Sikorsky KPI to create highly specialized programs in the field of cybersecurity. And the university gave a positive response. The guests also listened carefully to the university expectations of cooperation with the Project Office of the Council of Europe.

After the negotiations the guests also visited two laboratories at the Instotute of Physics and Technology, which became an end of the promising visit.