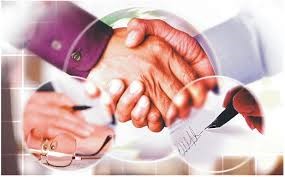 He was accompanied by First Secretary of the Embassy of South Africa in Ukraine Vishvont Munlchend Badal and counselor of Embassy on economics and tourism Alexander Okhrimenko. In the visit also took part Head of Department of Sub-Saharan Africa of the MFA of Ukraine Rustam Acar.

Participants have discussed potential of cooperation between KPI and universities, research institutions and companies working in the real economy of South Africa. Particular attention was paid to the potential of cooperation in the scientific support of nuclear power and the aerospace industry. The agreement was reached to extend contacts and explore the possibilities of establishing academic exchange and organization of training programs of double degree between KPI and universities in South Africa.

“Memorandum that has just been signed, is one of the basic documents in the organization of cooperation between our two universities and in a creation of consortium to prepare a major project” EnergyWare – Energy Efficiency of Warehouses in Chains of Sea Supplies” for participation in the program of European Union “Horizon 2020”, – emphasized director of Institute for Energy Saving and Energy Management Professor Sergei Denisyuk before signing ceremony.

The purpose of the visit was to discuss the course of agreement performance previously signed in October 2015, the opening of Chinese and Ukraine acoustic laboratory, discussion of the strategic scientific and technical cooperation between the Academy of Science of Shandong province and NTUU “KPI” as well as the lines of further cooperation in the field of biotechnologies, new materials, energy industry and ecology.

On 27 May the following documents of cooperation between particular structural subdivisions of NTUU “KPI” and Academy of Science of Shandong province were signed at the ceremony in Administrative hall: memorandum on creation of common laboratory together with the Institute of Biology and Chemical and Technological Faculty in the field of development and production of electrochemical sensors, agreement on common laboratory between Shandong Center of Analysis and Testing and Faculty of Biotechnology and Bioengineering in the field of the development of environment pollution control biotechnologies; agreements on scientific and technical cooperation between Institute of new materials and Faculty of Biotechnologies and Bioengineering; agreements on strategic cooperation between Administration of foreign specialists affairs of Shandong province and NTUU “KPI”; protocol aimed at making decisions analytical base in the field of organizations scientific activity control of PRC; protocol on joint laboratory between Institute of Automation and Special Construction Bureau “Storm” in the field of development and research of submarine robot technologies; Regulation on joint laboratory for hydroacoustics, created by the Institute of Oceanographic Institute of Oceanographic Instrument Academy of Sciences of Shandong province and Special Construction Bureau “Storm”.

Viktor Yushchenko, the third Ukrainian president, participated in it.

Participants of the meeting discussed the problem of financing the industry and individual space projects that are implemented by national industry and research groups. The problem of popularization of each successful step towards the revival of the state space capabilities and a wider acquaintance of fellows with achievements of Ukrainian scientists was raised.