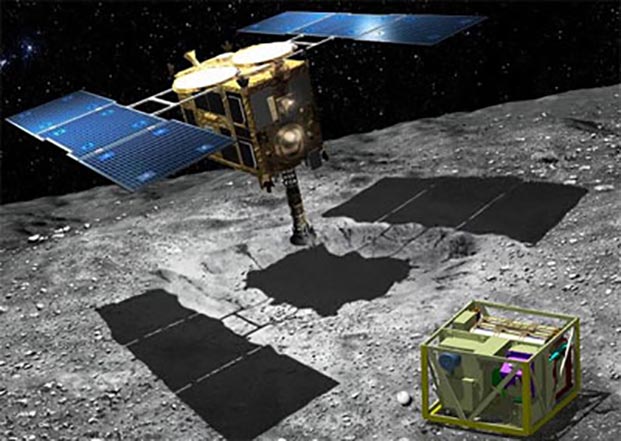 WE SINCERELY CONGRATULATE THE SCIENTISTS OF THE FACULTY OF HEAT AND POWER ENGINEERING (SCIENCE ADVISOR VOLODYMYR YURIYOVICH KRAVETS), PARTICIPATED IN THE INTERNATIONAL SPACE PROGRAM  FOR EXPLORATION THE SOLAR SYSTEM!

Igor Sikorsky KPI has received the following letter from Andreas Rittweger, Director of the Institute of Space Systems of the German Aerospace Center (DLR):

In this letter we would like to inform you that the asteroid lander MASCOT (Mobile Asteroid Surface Scout) has been successfully landed on Oct 3rd, 2018 on the near-Earth Asteroid Ryugu and after 17 hours being on the asteroid surface has completed its scientific program.

In the elaboration of the thermal control system of this lander, the scientists of Heat and Power Engineering Faculty of Igor Sikorsky KPI have participated. Effective heat transfer devices with unique properties were designed, manufactured and tested in specified conditions by them, which allowed a successful operation of the MASCOT lander on the surface of the asteroid after 3.5 years in space.

With this letter, we would like to thank the scientists of the Heat and Power Engineering Faculty of Igor Sikorsky KPI (science advisor Dr. V. Kravets) for the successful realization of this project. We appreciate their efforts for the realization of the heat pipe flight models without delays that contributed highly to the successful delivery of the asteroid lander MASCOT for launch on Dec 3rd, 2014.

We are satisfied with the scientific outputs of our collaboration with the KPI scientists: four joint scientific papers published in international proceedings, two mutual reports on the world recognized conferences are excellent contributions to the international scientific society.

We hope that the current and future contacts will promote Ukraine’s integration into the European Space community and will support human relation.

For reference, the MASCOT module worked as part of a space mission, which began on December 3, 2014, with the launch of the Japanese Hayabusa-2 probe from the Tanegashima Space Center. Its purpose was to study the asteroid of the “C” class, including the delivery of samples of its soil. The target was the Asteroid Ryugu, whose diameter is estimated at 0.92 km, the orbit in the perihelion enters the orbit of the Earth, and in the aphelion touches the orbit of Mars. The probe’s path to the research object was more than 3 billion kilometers. Since October, the MASCOT module, developed by the engineers of the German Aerospace Center and the French National Space Research Center with the participation of KPI specialists, has successfully landed on an asteroid. The module has dimensions 30 by 30 by 20 cm and a mass of 9.6 kg. During descent from a height of 51 meters, MASCOT made a series of photographs. During its work on a space object, the module successfully completed a research program using a spectrometer, a magnetometer, a radiometer, and a camera and transferred them to an orbiter. The completion of the mission and the return of the Hayabusa-2 probe to Earth is scheduled for December 2020. 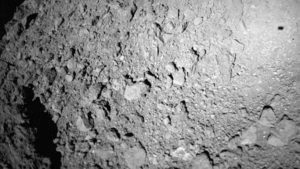 A snapshot of the asteroid Ryugu surface, made by the MASCOT module (photo by the Japanese Aerospace Exploration Agency – JAXA)