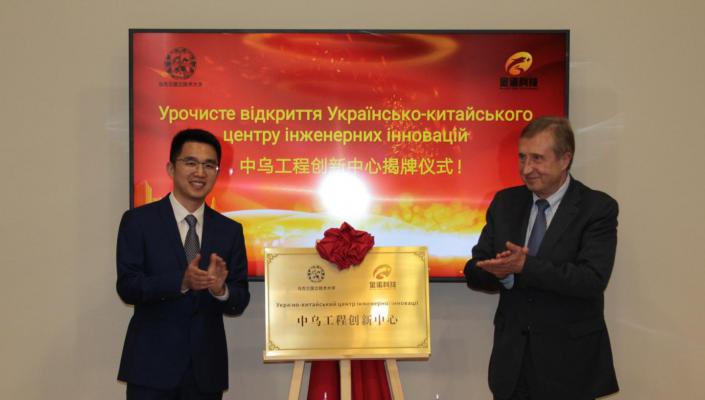 On May 21, 2019, the Ukrainian-Chinese Center for Engineering Innovations was opened in the National Technical University of Ukraine “Igor Sikorsky Kyiv Polytechnic Institute”.

The following persons participated in the opening ceremony: First Secretary of the Embassy of the People’s Republic of China to Ukraine Zhang Ju, Director General of Zhejiang Golden Egg Science and Technology, Li Liumeng, Head of the Ukrainian-Chinese Center for Engineering Innovations, director of the Ukrainian branch Chang Shi Chao on the Chinese side and Rector of the Igor Sikorsky KPI Academician of the National Academy of Sciences of Ukraine Mikhailo Zgurovsky, Vice-rector for international collaboration, Corresponding Member of the National Academy of Sciences of Ukraine Serhiy Sidorenko, Vice-rector for perspective development Oleksiy Novikov and others on the Ukrainian side.

“Today we have a very important event: we are opening a joint center of engineering innovations. It was founded thanks to the initiative of the well-known company from the People’s Republic of China – Golden Egg. We thank its manager Mr. Lumin. It was less than a year, as during the meeting with the company representatives we discussed this project, and now we have the pleasure to open this center, – said Mikhailo Zgurovsky at the opening ceremony.

There are big plans ahead of us. We plan to hold the festival “Sikorsky Challenge” jointly not only in Ukraine but also in China; we plan to work on the opening of a joint Ukrainian-Chinese international institute; we plan to open a joint laboratory of artificial intelligence. We have a lot of interesting joint work”.

The participants of the meeting discussed the directions of further cooperation and projects that are proposed to be implemented at the Center, primarily in the field of artificial intelligence. And, of course, the conditions for their implementation. In particular, it was emphasized that the achievements of the Kyiv polytechnics would remain the intellectual property of the University and its partners.

“The Golden Egg Company is not so much an incubation platform as a real large science park. It has very large volumes of cooperation not only with Ukraine but also with many enterprises in China and other countries. It is known that the Kyiv Polytechnic Institute is a leading technical university of Ukraine and our strategic partner. Therefore, I believe that this center can be not only the center of cooperation between KPI and Golden Egg but also a platform for cooperation between China and Ukraine, – said Zhang Ju in a welcoming speech.

It is worth noting that the new center was created for the implementation of one of the paragraphs of Agreement which was concluded last year between the Igor Sikorsky KPI and Zhejiang Golden Egg Science and Technology, whose position is now being actively implemented by both parties.

In the photo: Li Liumeng and Mikhailo Zgurovsky after the opening the Ukrainian-Chinese Center for Engineering Innovations