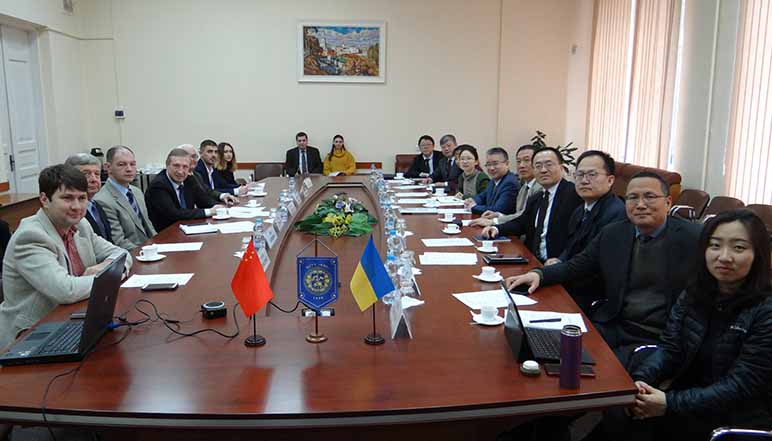 On April 11, 2019, the Igor Sikorsky KPI was visited by the delegation of the Chinese National Space Administration (CNSA) headed by its Vice Administrator Mr. Tian Yulong.

The two first secretaries of the Chinese Embassy in Ukraine, Ms. Zhang Ju and Mr. Zhang Ming attended the meeting. Negotiations were focusing on the start of the Igor Sikorsky KPI cooperation with the space sector in China.

During the meeting, the rector Mikhailo Zakharovich Zgurovsky described the space program of the university, its directions, and implement developments. He told, in particular, about university nanosatellites, the work of university researches on the creation of microsatellites for remote sensing of the Earth, on uncrewed aerial vehicles, and other.

In turn, Tian Yulong introduced the participants the activities and priorities of the Chinese National Space Administration (CNSA). He also initiated the creation of an open international university platform in the form of a joint laboratory with the participation of the Igor Sikorsky KPI and four Chinese universities, who are participants in major space programs and can become partners of the KPI in the near future.

Igor Sikorsky KPI agreed with the CNSA proposal for the creation of such a platform and suggested that this proposal, after careful study and discussion, be included in the program of the Sixth session of the Ukrainian-Chinese sub-commission on space cooperation of the Commission on cooperation between the government of Ukraine and the government of the People’s Republic of China, which scheduled for November 2019 in Kyiv.

In this way, KPI the Igor Sikorsky KPI – with the support of the Embassy of the People’s Republic of China in Ukraine, the Chinese National Space Administration and the State Space Agency of Ukraine – can become an important participant in the program of Ukrainian-Chinese cooperation in the space industry.

A brief photo report about the visit is available here.