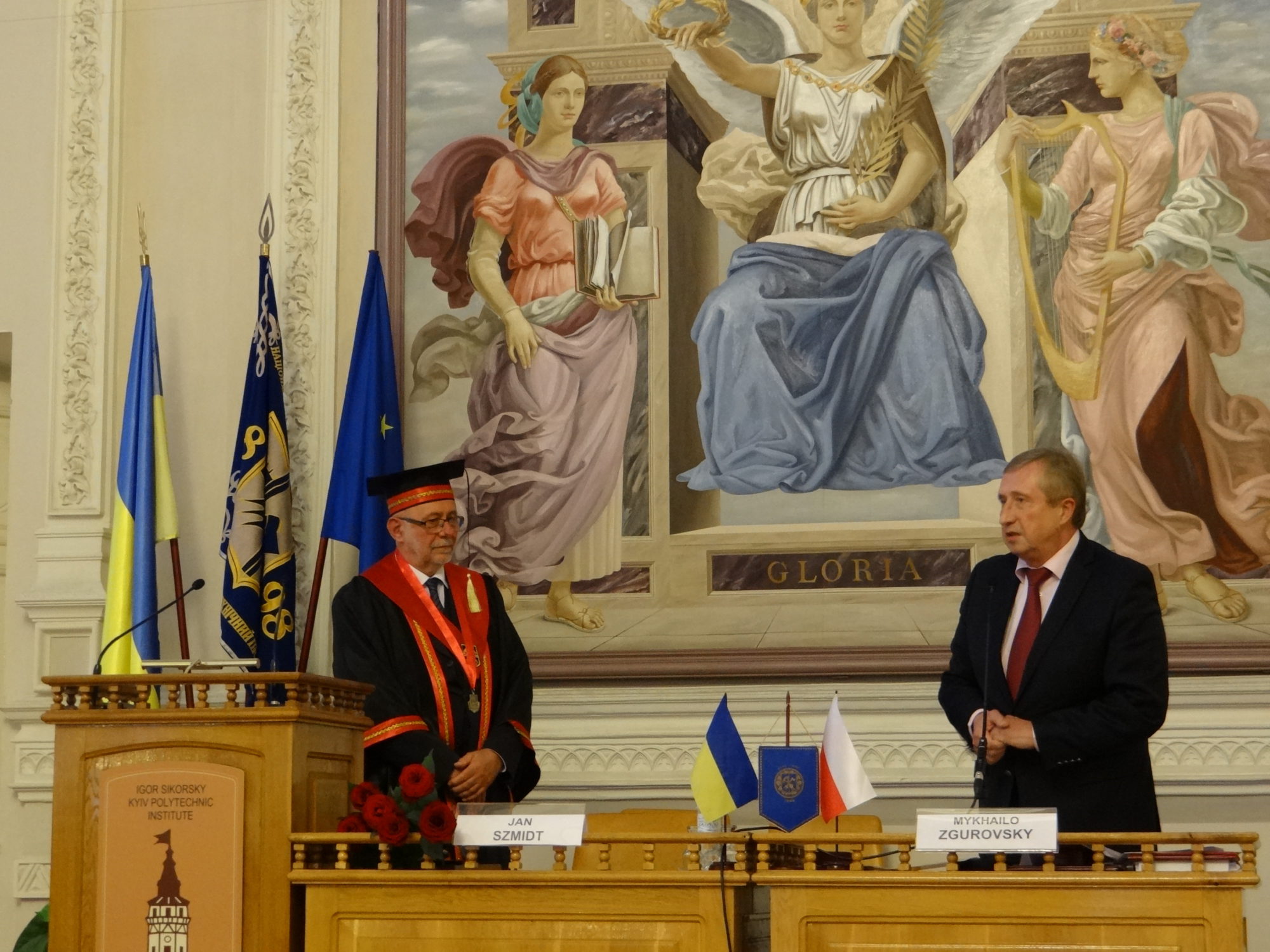 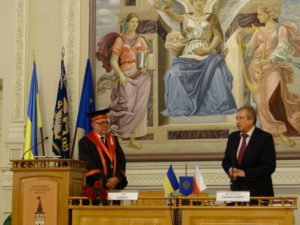 On September 4 in the Hall of Meetings of the Academic Council of the Igor Sikorsky KPI held a solemn ceremony of awarding the diploma “Honorary Doctor of the National Technical University of Ukraine “Igor Sikorsky Kyiv Polytechnic Institute”, a mantle, a bonnet and a honorable badge to the famous Polish scientist, rector of the Warsaw Polytechnic Jan Szmidt.

For decades, our universities built their relationships as brothers, now comes the time when these – traditionally fruitful in the past – relations have been restored and developed. Close partnership relations between the Igor Sikorsky KPI and Warsaw Polytechnic have been particularly deepened during the last decade.

On June 19-20, 2006 Rector of NTUU “KPI” M.Z. Zgurovsky visited the Warsaw University of Technology, took part in a meeting of the Senate of the Warsaw University of Technology, delivered a speech before the faculty. During his stay in Warsaw, an agreement on partnership, cooperation and scientific exchange between universities was signed, which gave a powerful impetus to establishing close cooperation. In the framework of cooperation the parties have agreed to make the following steps in the field of education, research, innovation, academic and cultural exchanges beginning from 2007:

The list of visits, seminars, lectures, summer schools, internships, academic exchanges, forums, joint scientific programs, sports and cultural events held by partner universities over the past 10 years is quite voluminous.

It should be noted that Warsaw Polytechnic together with the Polish Educational Foundation “Perspectywy” became one of the organizers of the creation of the “Ukrainian-Polish Center” in the Igor Sikorsky KPI, as well as the initiator of the “Ukraine-Poland” forums that have become traditional.

In April 2017 in the Igor Sikorsky KPI has already hosted the third Forum of Rectors of Higher Technical Institutions of Ukraine and the Republic of Poland, which this time was devoted to considering the problems of integration of education, science, and innovations in the context of cooperation between Ukrainian and Polish technical universities.

The Igor Sikorsky KPI highly appreciates the contribution of the leadership of the Warsaw Polytechnic University to the development of cooperation between our universities.

In November 2007, the title of “Honorary Doctor of NTUU “KPI” was awarded to the rector of Warsaw Technological University Prof. Włodzimierz Kurnik.

Since March 2012, the Warsaw Polytechnic is headed by Prof. Jan Szmidt.

Jan Szmidt is not only a prominent organizer of educational and scientific activities but also a renowned scientist in the field of microelectronics and optoelectronics. After graduating from the Faculty of Electronics and Information Technologies of Warsaw Polytechnic in 1976, he stayed there and overcame all stages of his academic career from a post-graduate student to a university head.

Therefore, given the outstanding scientific achievements and significant personal contribution of Jan Szmidt to the development of cooperation between the Warsaw Polytechnic and the Igor Sikorsky KPI and, in general, between the universities of the Republic of Poland and Ukraine, on February 16, 2017 Academic Council of the the Igor Sikorskyi KPI decided to acknowledge his activity and to award him with the title “Honorary Doctor of the National Technical University of Ukraine “Igor Sikorsky Kyiv Polytechnic Institute”.

After the ceremony, Professor Szmidt read a nominee lecture on reforming the system of science and higher education in Poland.

You can see a brief story about the event by clicking the link.